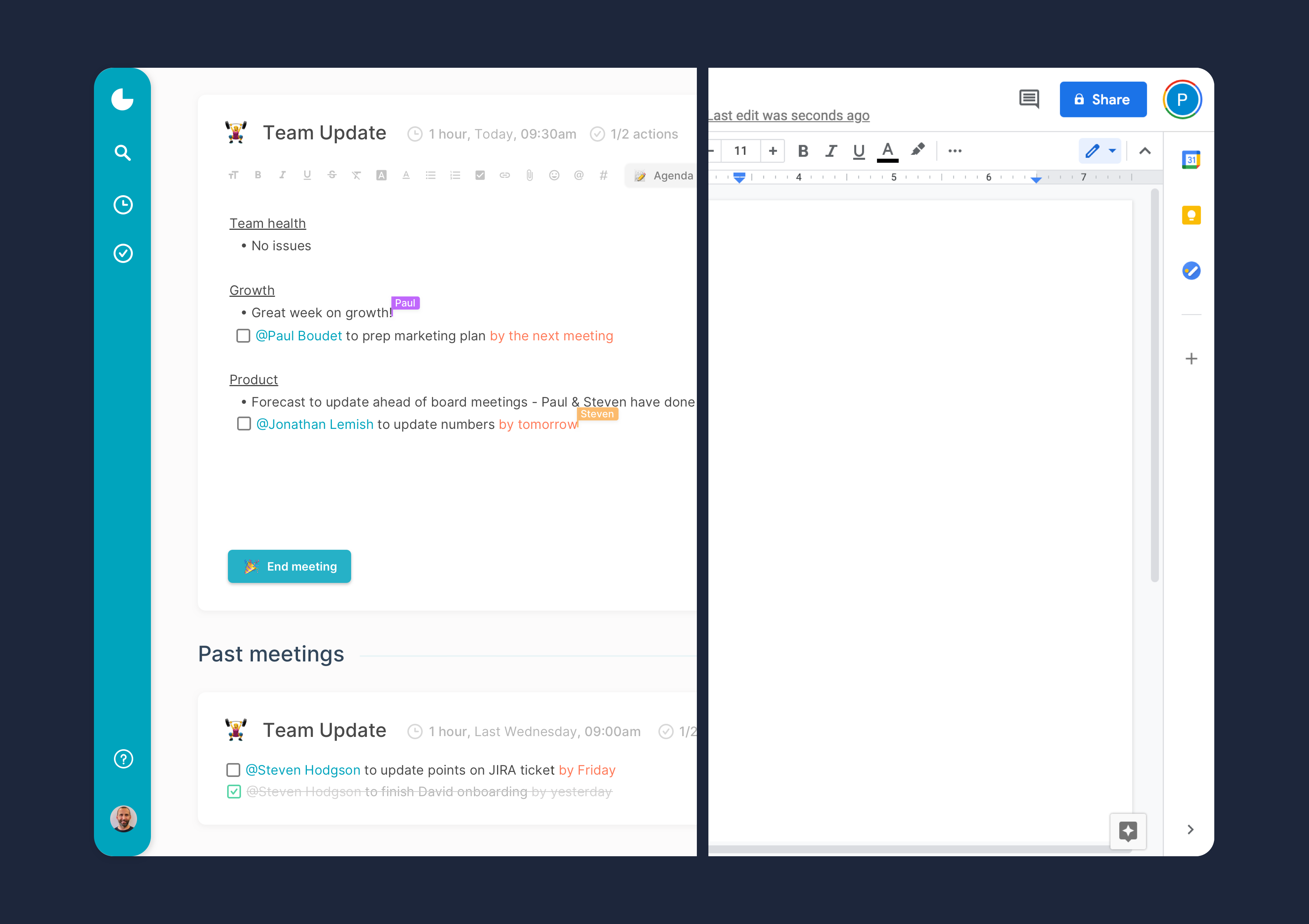 We've all used Google Docs in weekly meetings. Nonetheless, Google Docs was never built for that!

It usually goes like this: At the beginning of the meeting, we find the Google Doc, open it, review the notes from our last meeting, ask an update from people on their actions (coming out of that last meeting), then write new notes on top of the old notes - with more or less structure to it.

Some of us even take extra time & effort by manually adding an agenda, sharing pre-reading materials, creating an action table, cleaning up the notes and more.

Taking a step back, It's easy to understand Google Docs popularity as a 'meeting workspace':

Nonetheless, Google Docs was never built for meetings - for example, it doesn't:

And unless you're the most effective team in the world, this usually translates into:

We didn't want to wait for Google Docs 2.0 (if it's a thing) to address the above - so we built Meetric instead.

Meetric is like Google Docs + Google Tasks but built for meetings. It's easy to use, cloud-based, collaborative, has flexible format and is shared easily. On top of that, it organises meeting notes by event, for all the events in your calendar.

Since launching Meetric, we've seen teams switching from Google Docs to Meetric overnight. Their meetings now go like this:

At the beginning of the meeting, Meetric automatically loads with the meeting details - agenda, participants, location (based on the event details in Google Calendar).

A countdown timer also appears, to show how much time is left in the meeting (based on the event time in Google Calendar).

Meetric highlights the outstanding actions from the last meeting, their owners and due dates (like a live accountability tracker!). We can expand any past meetings to see all the actions decided then (done or not) and general notes.

As the meeting runs, we write down new notes (real-time collaboration like Google Docs) and create new actions with clear owners (which they can later mark as 'done' in Meetric).

At the end of the meeting, the host shares the notes & actions to complete, by email or Slack in just 2-clicks - and Meetric gives him a congratz message if the countdown timer didn't get to 0, meaning the meeting finished earlier than expected!

Later on and before the next meeting, participants...

Teams using Meetric over Google Docs have reduced unnecessary admins, got better accountability from one meeting to the next and saved time!

If you're a founder, leader or manager, try Meetric in your next meeting with your team - or book a 10min call with me to learn more.